“Never again submit to a yoke of slavery.”

I stood puzzled on the prayer line. These words repeated over and over again in my head.

“Never again submit to a yoke of slavery”

I’d heard this before but could not pinpoint which verse it belonged to.

That evening, I asked for prayer to hear God’s voice more clearly. I often struggle with hearing His voice above my own, or worse, the enemy’s voice. But I could hear Him clearly

now, and He kept repeating the same phrase.

“Never again submit to a yoke of slavery”

I opened my bible and started searching for the rest of this mystery verse. I landed on Galatians 5:1:

“ For freedom Christ has set us free; stand firm therefore, and do not submit again to a yoke of slavery.”

The reason God pointed me towards this verse made sense now.

I have a lot of big decisions to make and fear has prevented me from moving forward. It’s kept me bound and from doing the things God wants for me to do. I need to trust God’s plan and let go of the things that I fear, knowing that God is already in it. I decided that I needed to study this verse out and as I started to dig, these two words really stood out to me:

Merriam Webster’s defines freedom as the power or right to act, speak or think as one wants without hindrance or restraint; the state of not being imprisoned or enslaved, able to move easily.

Free is defined as: not under the control or in the power of another; able to act as one wishes; no longer confined or imprisoned. Released from captivity or slavery.

Freedom seemed so inviting, yet so unattainable on my own.

I thought of all the ways fear has bound me and kept me from being truly free:

Often, I worry about what others think.

I fear saying no.

I fear being hurt by others.

All these fears manifest in my daily living as people-pleasing, not setting good boundaries, perfectionism, procrastination and putting up walls to protect myself. Every thought and action is controlled by fear. When I submit to fear, I’m placed under its control.

The Lord then showed me an image of me with a yoke around my neck, trying to pull a large cart. On it were my worries and cares, and they were HEAVY. As He was describing this to me, I could literally feel the yoke on my neck, rubbing against my skin, making my neck and shoulders feel strained and raw.

It was too much for me. I was never meant to carry it all.

He then showed me an image of slavery. My arms were bound with heavy shackles and chains, my back hunched over as I tried to move my heavy load.

Looking at the images I felt helpless, hopeless. God showed me freedom and what it means to be free. He gave me an image of my arms opened wide, no burdens on my shoulders or neck. No chains on my arms or hands. I could move freely and in sync with Him. There were no worries or cares of what others thought or making mistakes. I could be open and free because I had placed everything in the Lord’s hands. The cares of this world would not matter to me, because I knew where my trust lies.

After seeing these images, God said: “Do you trust me? Can you let go and give everything to me?”

Frightened but so willing to be free, I nodded and softly said, “ Yes.”

I could feel the weight I’d carried, the fears I held onto falling off my shoulders.

My chains and yoke removed, I could now move forward

Fear is something that I actively have to remember not to submit to. It’s so easy to return to my old ways of thinking and acting because it is what I know. It’s a daily choice to not walk in fear and walk in trusting God and Him alone. There are days that I still stumble and find myself putting on the yoke of fear

, but as soon as I cry out to God and turn back to Him, He is there to remove it so I can be free.

So I ask you today, what binds you? Is it fear? Guilt? Shame? Sin?

Cry out to God so that you can be free.

And never again submit to a yoke of slavery. 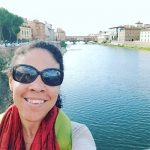 Alexis is a 35 year old lover of Jesus, loose leaf tea, roller coasters, writing stories and going on adventures. Originally from Marietta, GA, Alexis now resides in Fresno, CA. You can always find Alexis outdoors enjoying a walk in her neighborhood, scoping out the newest food truck, hanging out with friends or planning her next trip. Her church, The Revival Center, and family mean the world to her. They have supported her through the loss of her mother and her own cancer diagnosis. Alexis enjoys encourging others by reminding them not to look at what they see, but to always look to God, who is working in the unseen.