I grew up a pastor’s daughter and am now privileged to be a pastor’s wife. Church and ministry life is really all I’ve ever known. There have definitely been ups and downs, but through it all, I have found God to be faithful and would never trade any of it for a different life. Ten years ago, my family made a significant life change when God called my husband to pastor a church across the country. We moved from the glorious green southeastern United States to the brown, dry desert of the Southwest. This move brought many challenges such as our family dog of 9 years dying a tragic death, foreclosure, and bankruptcy to name a few. I began to question God and His sovereignty in bringing us there and my heart started to feel dry and parched just like the land we were living in.

When Doubts Creep In

Trying times have a way of causing us to question the truth we know about God, don’t they? Satan, the enemy of old hasn’t changed his tactics over the years. Remember when he said to Eve, “did God really say?” (Genesis 3:1). It’s definitely something to remember each time we get tempted to question God. Fast forward 8 years to 2016. My dad, who was not just my dad, but my pastor growing up, the one who led me to faith in Christ, my partner in crime in all things hilarious, my encourager, my HERO, got deathly ill. It wasn’t until after he died that we found out he had the dreaded disease of ALS. Once again, I found myself questioning God. I didn’t just question God, I questioned everything I believed in, even heaven itself. 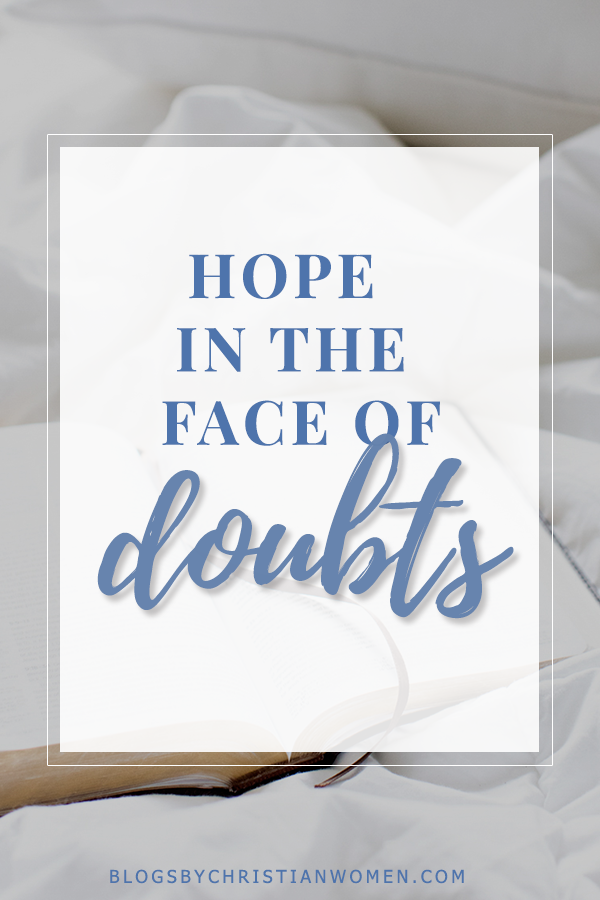 Thoughts swirled in my mind like, “what if it’s all a myth?” “What if there really isn’t a God after all?”

Have you been there? God is so patient with us. He led me one day to Romans 5:1-5 which says,

“Therefore having been justified by faith, we have peace with God through our Lord Jesus Christ, through whom also we have obtained our introduction by faith into this grace in which we stand; and we exult in hope of the glory of God. And not only this, but we also exult in our tribulations, knowing that tribulation brings about perseverance; and perseverance proven character; and proven character, hope; and hope does not disappoint, because the love of God has been poured out within our hearts through the Holy Spirit who was given to us” (NASB).

Clinging to Truth Found in the Word

Through this, God reminded me of some important foundational truths:

This is not merely a wishful hope because, in the Bible, God’s hope is always looking forward to a reality; it’s the hope in something absolute.  I knew the only way to fight my doubt and despair was not to repress it, but to replace it with God’s truth! I began to say, “Lord, whether I understand it or not, I am choosing to rejoice in hope of Your glory! I am choosing to rejoice in heaven even though I am tempted to doubt its reality.” I began to do this with every doubt the enemy was throwing at me.

I knew the only way to fight my doubt and despair was not to repress it, but to replace it with God’s truth!

As God began to work in my heart through His Word, the next few verses proved to be true. As I chose to rejoice in the hope of the glory of God, His grace began to enable me to rejoice in my tribulation. Was I rejoicing that my dad died of a terrible disease? No! But I chose to thank God in spite of it knowing that now he was whole and complete. I knew he was in heaven with Christ and that God’s grace had been sufficient to us all through a very difficult time. I could rejoice that one day death and sickness will be eradicated because of Jesus’ death and resurrection. As I rejoiced, I supernaturally began to persevere (to bear up under) in my difficult circumstance. I knew it was the Almighty God bearing my heavy burden.

As I persevered, I began to experience “proven character.” You could say that God was proving His character to me and in me. Now to verse 4, proven character brings about HOPE! I started this journey with doubt, and ended it with more hope than I ever imagined! Verse 5 says, “and hope does not disappoint, because the love of God has been poured out within our hearts through the Holy Spirit who was given to us” (NASB). As believers, God has sealed us with the Holy Spirit of promise (Ephesians 1:13). His promise will be fulfilled!

The next time you are tempted to question God, don’t repress your doubts, replace them with what you know is true from God’s Word! My dad preached his last sermon in a wheelchair from Asheville, NC at Billy Graham’s Training Center (The Cove). We didn’t know that he would be in glory just 2 days later. His voice was weak and he couldn’t hold his head up. The crowd was hanging on every word when he said, “spiritual faith begins where human ability ends.” He went on to say that questioning God’s compassion leads to questioning God’s character. Questioning His character leads to questioning His credibility to be God in our lives. We are not capable in and of our own ability. We must surrender to His ability that is ever available to us.

Don’t repress your doubts, replace them with what you know is true from God’s Word!

I will never forget how God brought us through that time. Life and ministry continue to bring challenges, but when I admit my inability to God, He begins to do the work in and through me. “God, I can’t, You never said I could. You can, and You always said You would” (Ian Thomas).

For Times You Struggle With Trust Stephanie Barber Christensen is a pastor’s wife and mom to two college students. She graduated from Liberty University in 1994 with a BA in Biblical Studies. God has given her a heart for encouraging women through God’s Word and seeing them discover His empowering grace.

Living Out the New Creation Life
Why Did I Get Married?