You all are familiar with Hebrews 11:1 right?  Now faith is confidence in what we hope for and assurance about what we do not see. I have had a picture hanging in my bedroom for over 15 years with that verse on it. Although I have moved a couple times in that 15 years, the picture and the truth in that verse has come with me.

Although the truth of that verse has stayed with me, I was unaware of the scripture in the rest of the chapter. Hebrews 11, better known as the faith chapter.

Faith. I have to admit that a lot of times, I feel like my faith is shaken. Even after I experience God move in powerful ways, so quickly I can experience fear. I can feel like the disciples who witnessed the miracle of over 5000 people being fed and then just hours later see Jesus walk on water and become terrified.

Let me share something with you that I just noticed in scripture. I always thought that when Jesus was walking on water that the disciples were initially scared of the storm. But His word never says that. The disciples were struggling because the wind was against them, but they didn’t seem to be afraid yet. It was when they saw what appeared to be a ghost approaching their boat that they began to be afraid.

Jesus immediately tries to satisfy their fears by letting them know that it was Him, but Peter challenges Jesus by saying “If it is you, tell me to come to you on the water.”

Peter asks Jesus to show him His power. And Peter follows when Jesus says “Come.” And that is when more fear sets in. When Peter steps out of the boat to go where he asked Jesus to lead him.

Have you ever asked God to lead you, He calls you, you follow, and then you become afraid because you realize the dangers around you? Yup, me too.

And how many times have I made a deal with God? I will… if You… I am quick to tell God what I will do and ask God to lead me, but when He, in turn, asks me to come, I can quickly remember that I like my safety boat. I don’t like the wind and the waves, and I don’t like it when it feels like I am beginning to sink.

I have to wonder if some of our fear isn’t because of the storm, but because of Jesus who defies all odds. I mean, who is this Man? Men don’t walk on water. Ghosts can float, not people. Right?

Are we afraid of His power?

Let me go back to the faith chapter. Hebrews 11. When I read the chapter as a whole, the power of the truths was overwhelming. I encourage you to go and read the entire chapter and let your faith rise as you read every word. But I want to share with you a few of the verses that hit my heart the hardest.

By faith Abraham, when God tested him, offered Isaac as a sacrifice. (verse 17)
By faith Moses, when he had grown up, refused to be known as the son of Pharaoh’s daughter. (verse 24)
By faith he (Moses) left Egypt, not fearing the king’s anger; he persevered because he saw him who is invisible. (verse 27)
By faith he kept the Passover and the application of blood so that the destroyer of the firstborn would not touch the firstborn of Israel. (verse 28)
By faith the people passed through the Red Sea as on dry land; but when the Egyptians tried to do so, they were drowned. (verse 29)
By faith the walls of Jericho fell, after the army had marched around them for seven days. (verse 30)

By faith, Peter followed Jesus and walked on water.

Faith. Confidence in what we hope for. Assurance of what we do not see.

Have you ever taken time to write down how God has worked the impossible when you have followed in faith? Have you taken the time to write it all down in the same place, on the same page? If you have not done so, I want to encourage you to take time right now. Begin each sentence with “By faith…” and remember at least 10 ways He has moved by faith. Then, when you begin to sink because of the fear of the wind and the waves, come back to these truths. The truths that reveal that God moves despite what we see as possible. Would you be willing to share some of your “By faith” truths with us? We would love to read them! 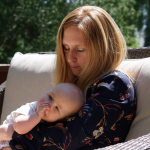 Jessica is a writer who desires for women to know that they are loved by a beautiful Creator. She currently lives in Norwalk, CT with her husband Mike, and two children, Charlie and Olivia. Find out more about Jessica by visiting her at The Path I Follow, or on Facebook.